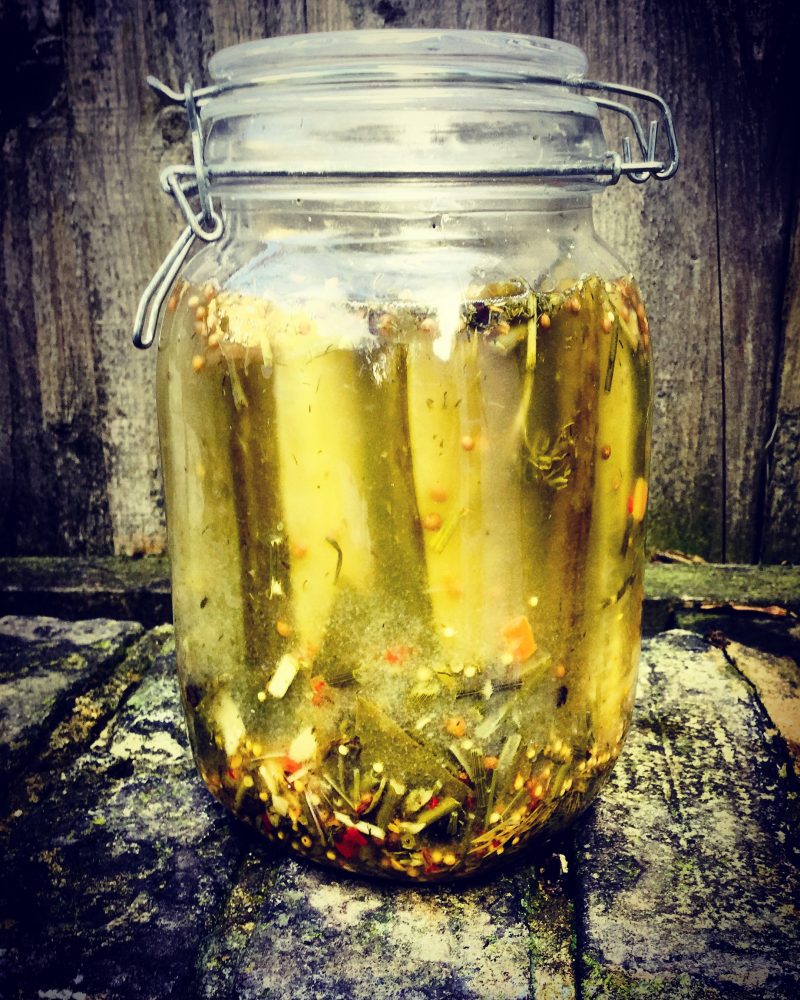 Different from your regular quick pickled gherkins! These little bad boys pack a punch as well as a healthy dose of probiotics! Hands down my favourite and best fermented cucumber recipe.

Using the process of lacto-fermentation, we allow the cucumbers to super-charge in a delicious herby and spicy brine mixture. The probiotics are formed when the naturally-present lactic acid bacteria in the plant begins to convert the sugars into lactic acid. The lactic acid is a natural preservative that inhibits the growth of harmful bacteria. By adding in salt, we further discourage the propagation of any harmful bacteria whilst allowing our veg to retain it’s crunch and absorb flavour! After a couple of weeks we are left with some truly spectacular tasting pickles!

For some more info on probiotics check out my other post here. 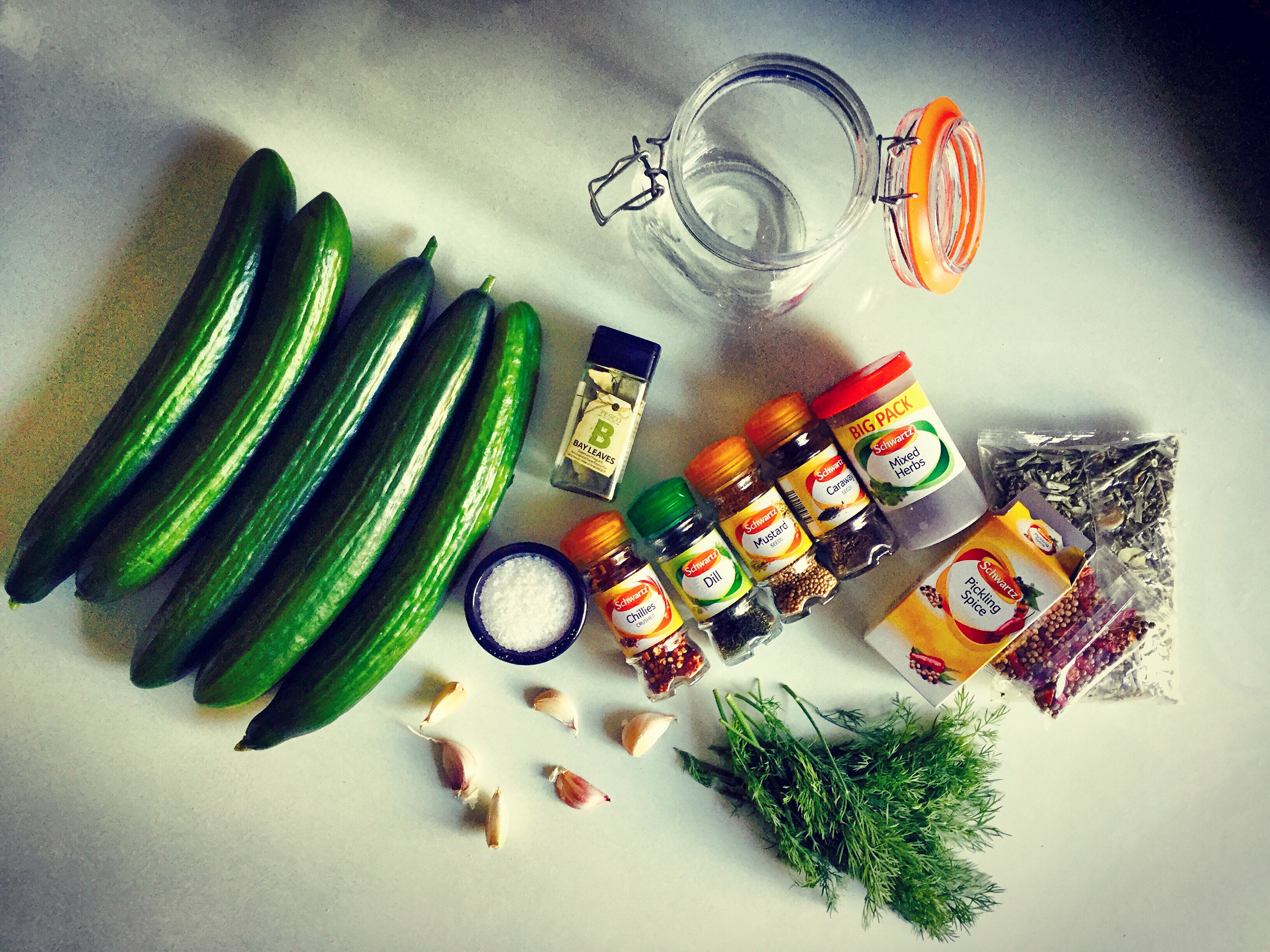 1.  Peel and crush the garlic.

2. Wash the cucumbers, half them and cut into strips. 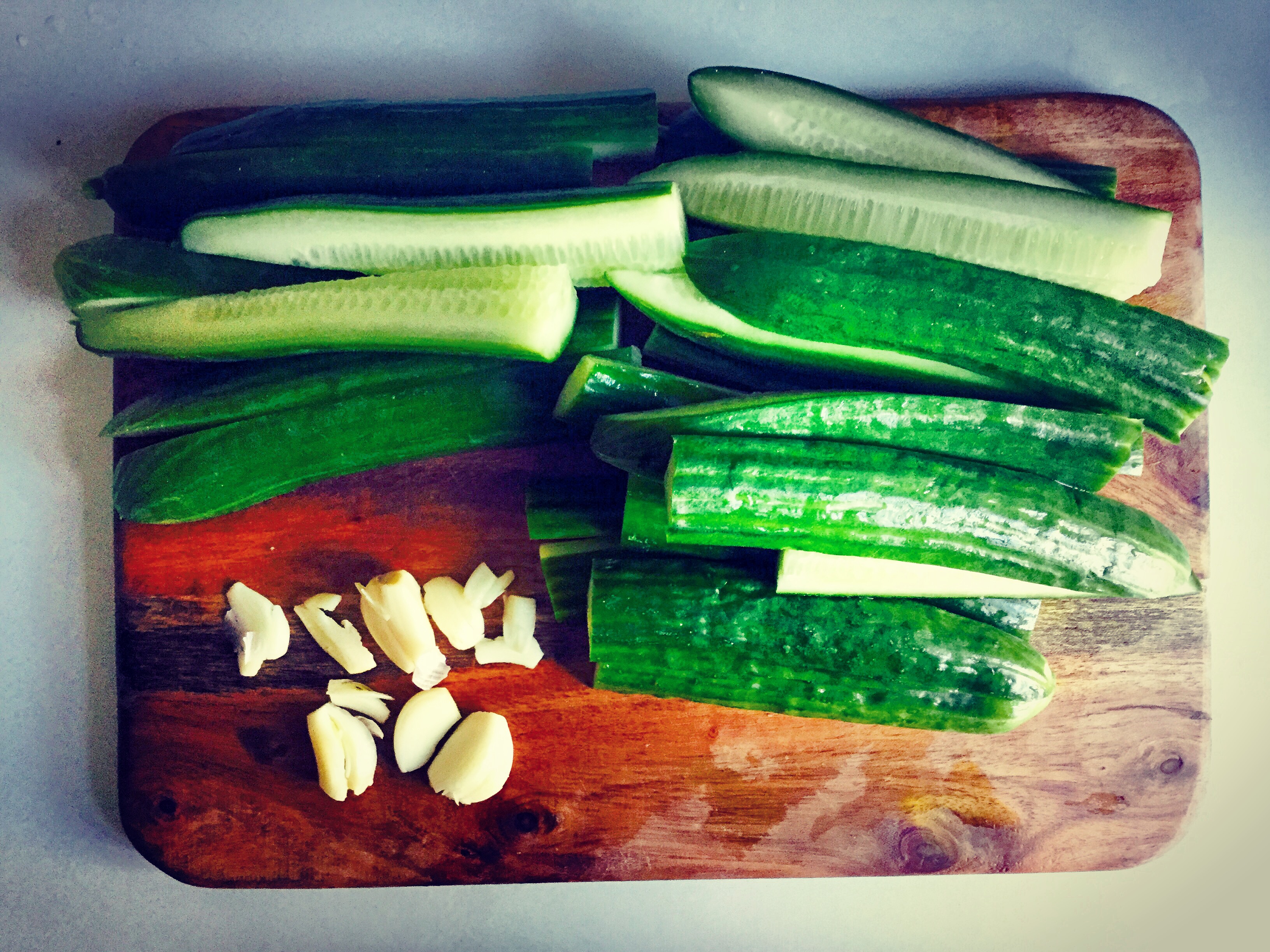 3. Add half of the spices, dill, and garlic to the bottom of your pickling jar. 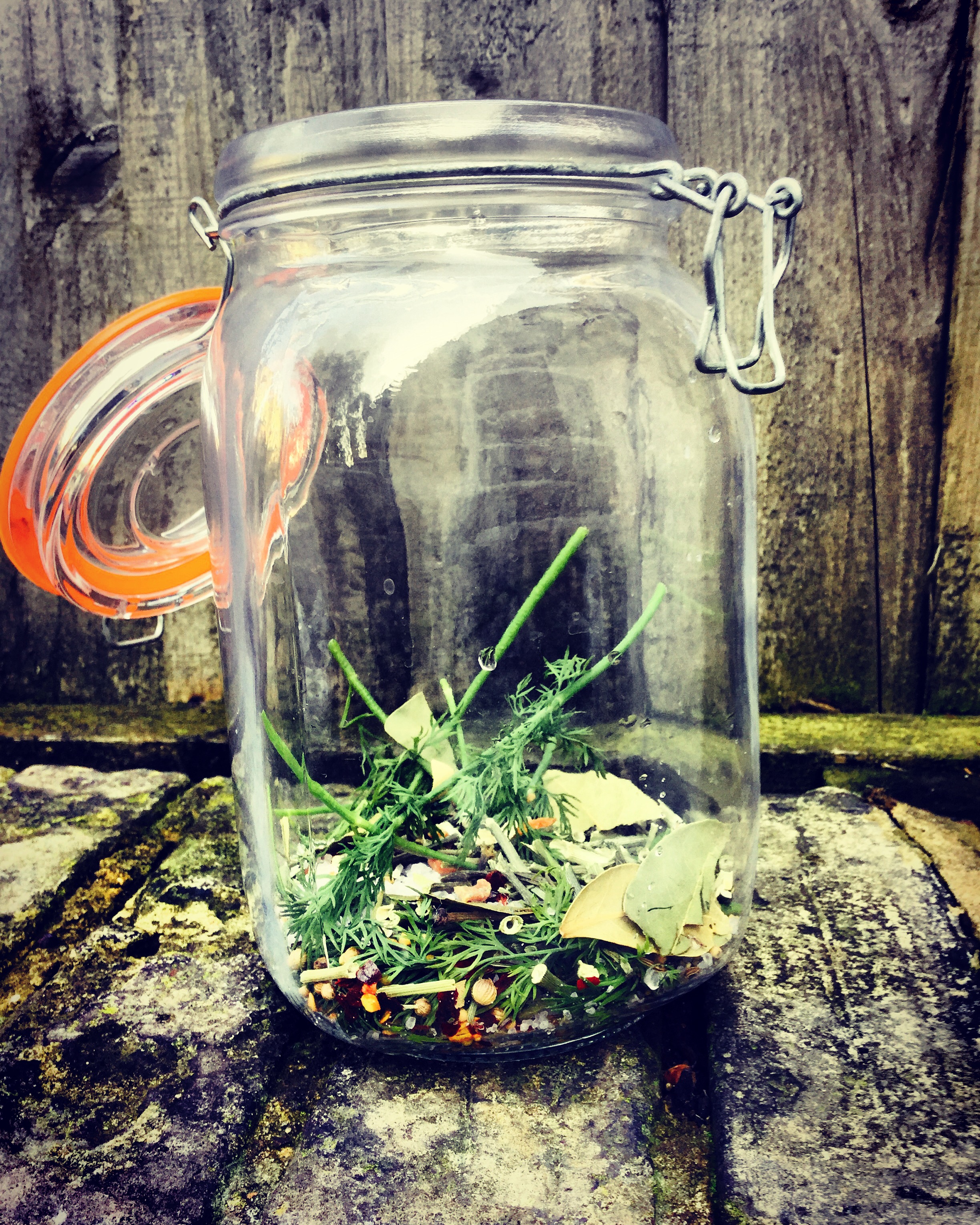 4. Pack in your cucumber strips. 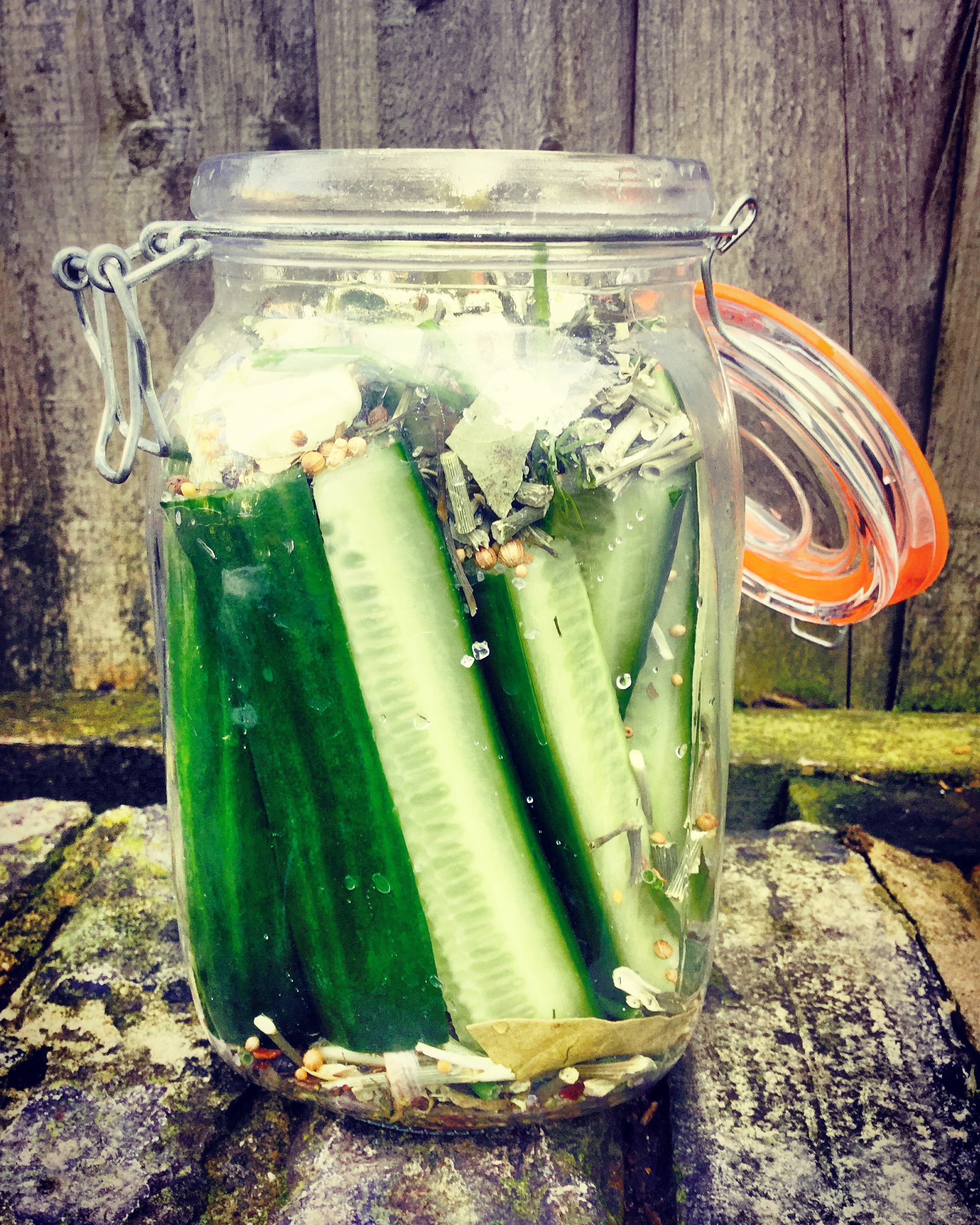 5. Add the rest of the herbs and spices. 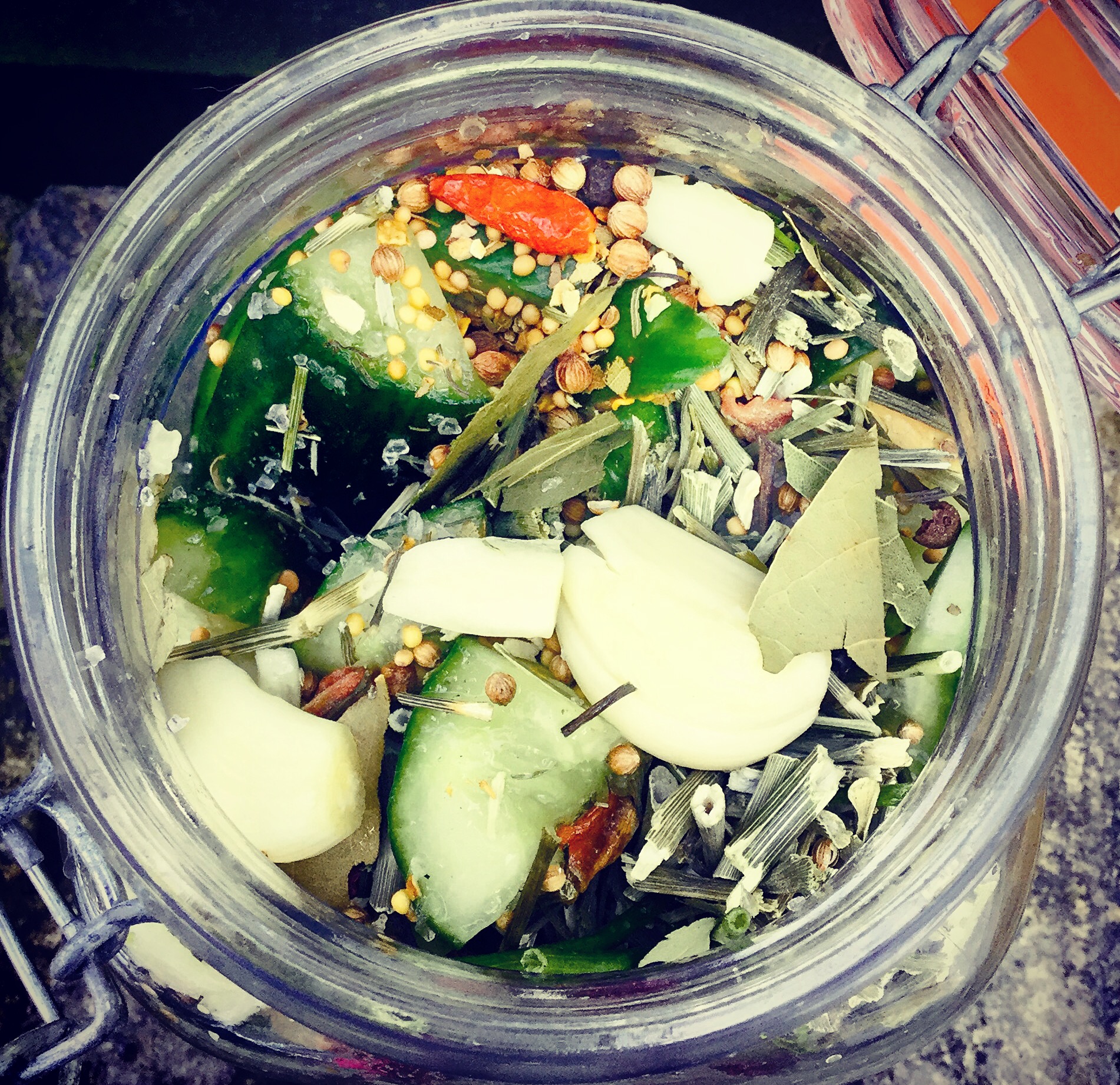 If you have any leftover cucumbers, try experimenting with some other flavour combinations in a separate jar. Here’s mine with some added ginger and turmeric!

6. Add water. Make sure it covers the cucumbers by about and inch and cover, but not seal, with a lid. 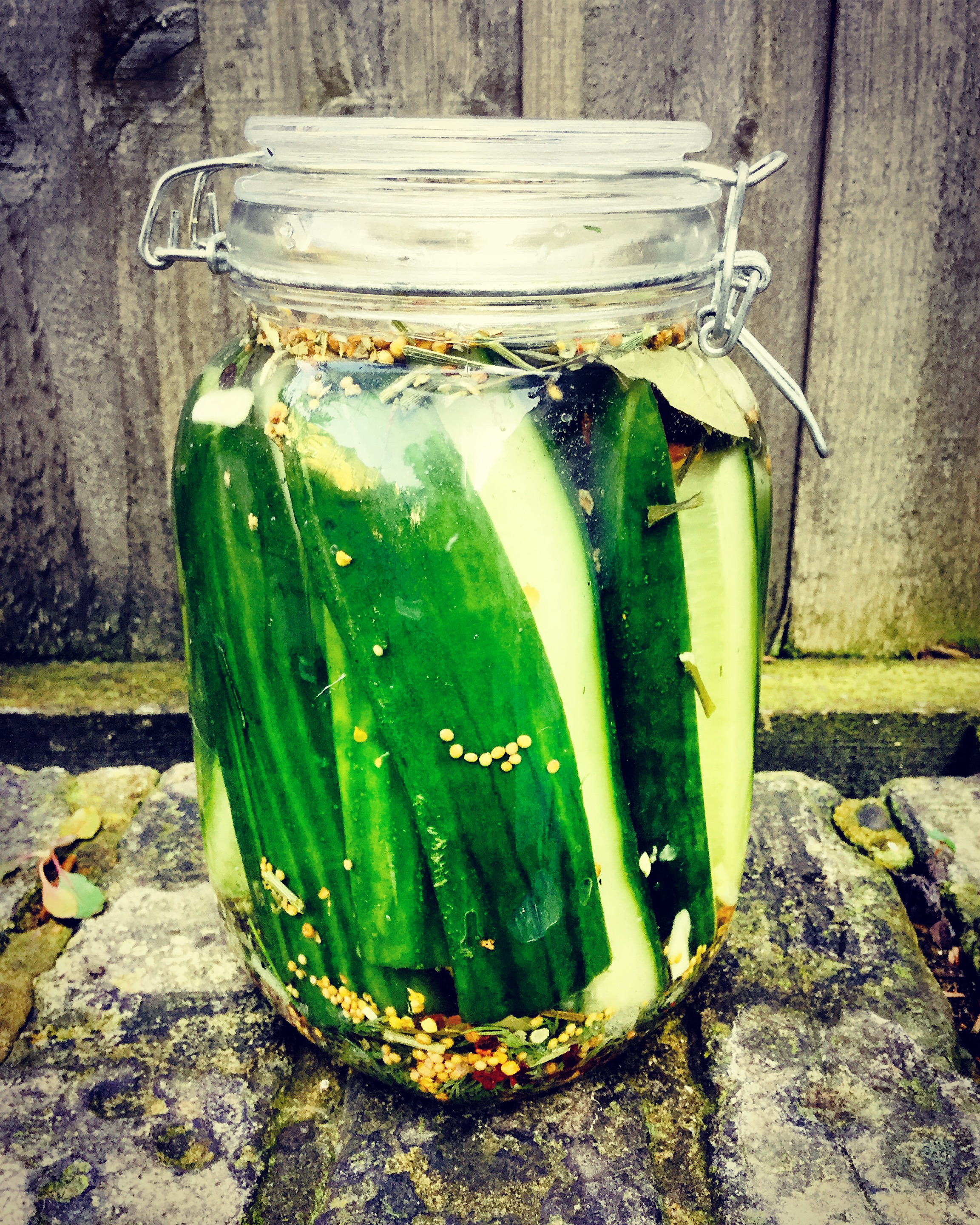 7. Set aside and let ferment for about 10-14 days. Every other day open up the jar and give the top a quick mix to prevent any mould from setting in. 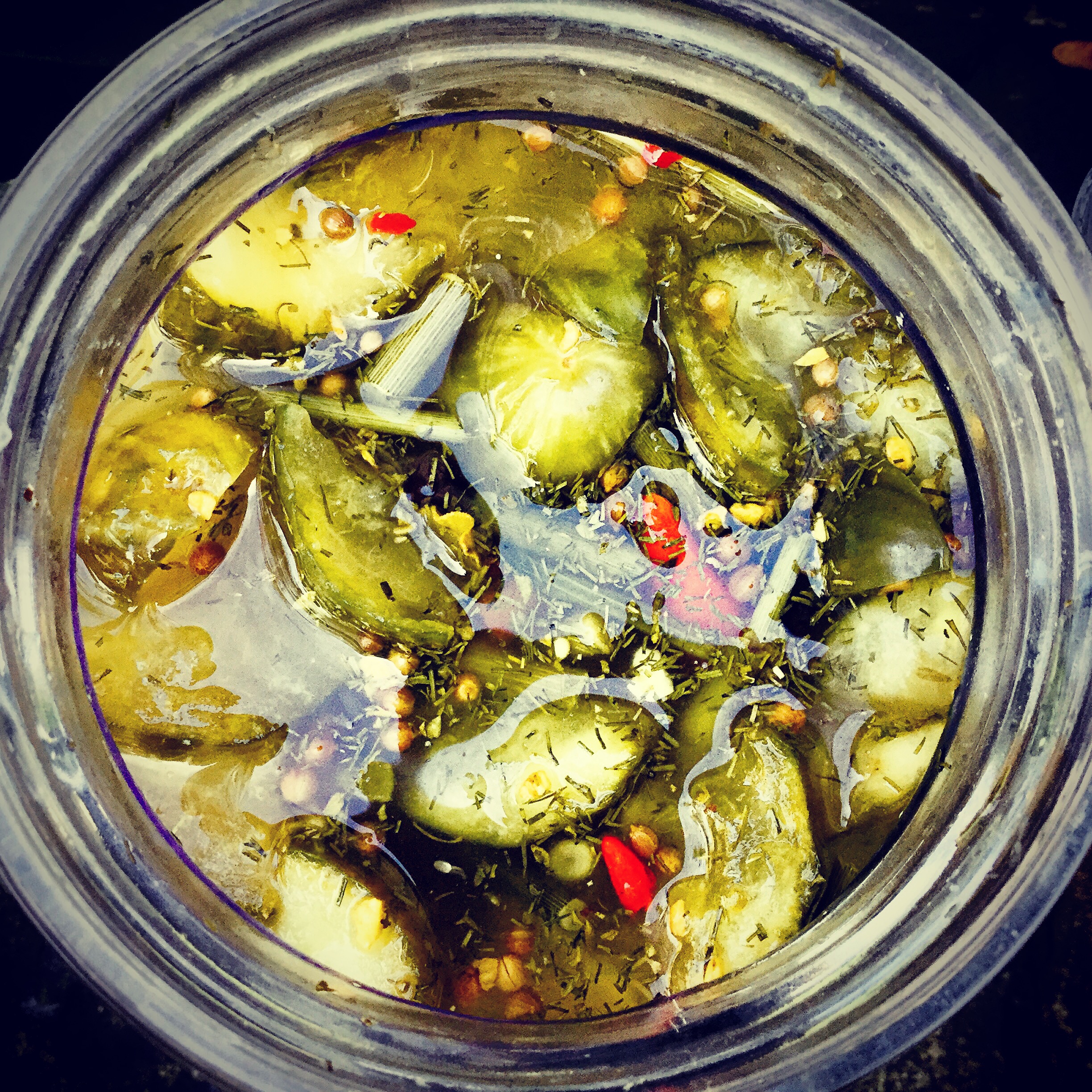 8. When done seal the lid tight and consume at own pace. They don’t really have a shelf life as the brine mixture prevents any bad bacteria growth, though leaving them for too long can infuse them with too much flavour. When finished, you should be able to taste a balance of the salty, sour and spicy flavours whilst the cucumber itself should still have a nice crunch. 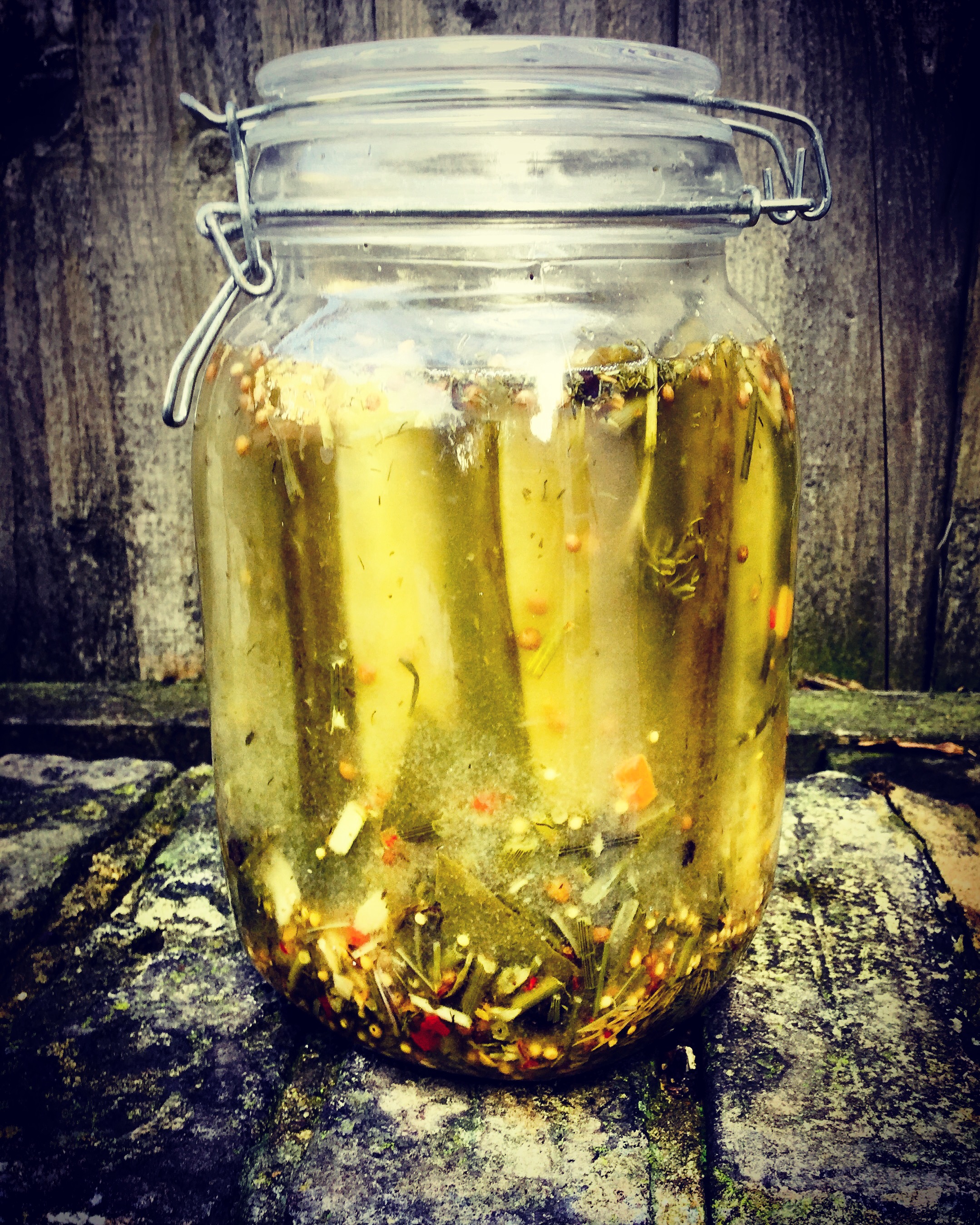 When consumed, you can repeat the process by filling the jar with cucumbers and making a little extra brine to submerge them in. Try experimenting with the spices to create your own best fermented cucumber recipe! 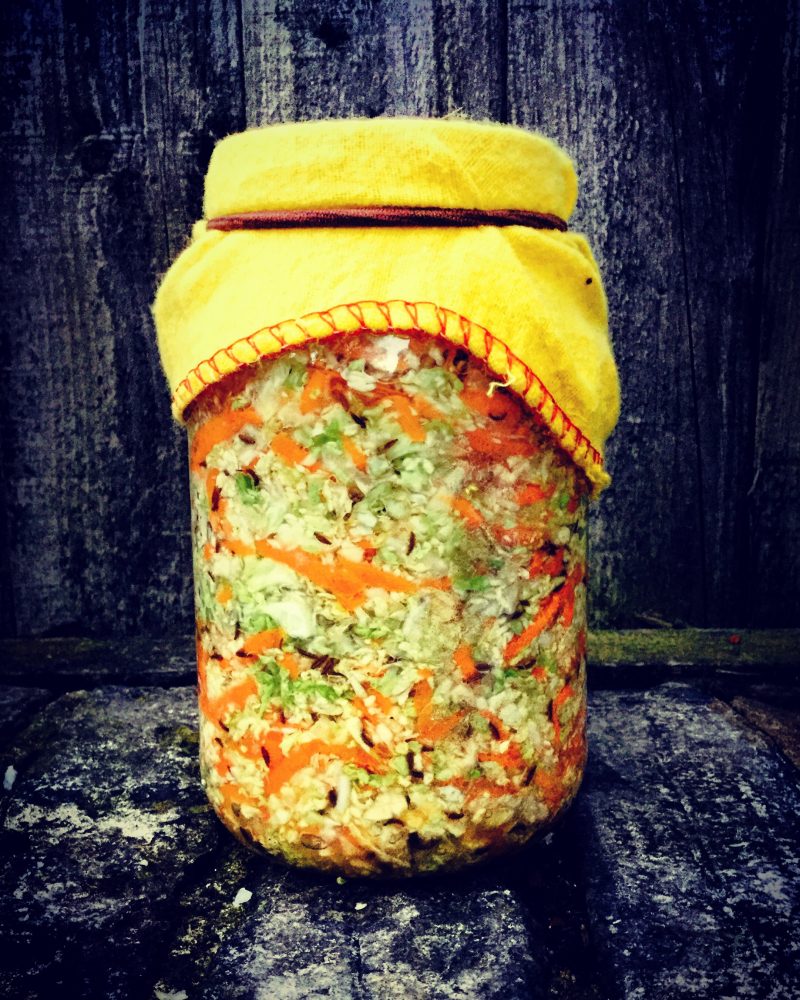 The Best Sauerkraut Recipe! Sauerkraut, traditionally, is a finely-sliced cabbage dish made using a process called lactic acid fermentation. This uses the beneficial bacteria (lactobacillus) present on the surface of the cabbage. When submerged in… 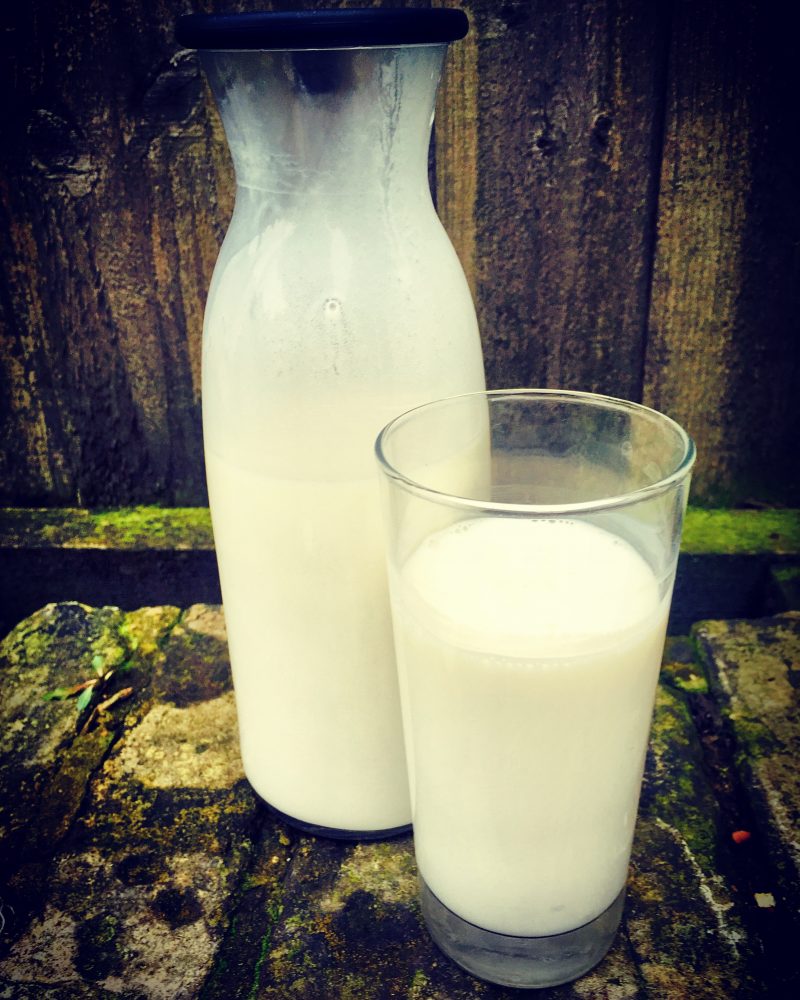 The Best Kefir Recipe This humble super-drink has been around for centuries but only now finding prominence in western culture. It is packed with probiotics, calcium, magnesium, vitamin B12, biotin, folate, riboflavin, and vitamin K2…. 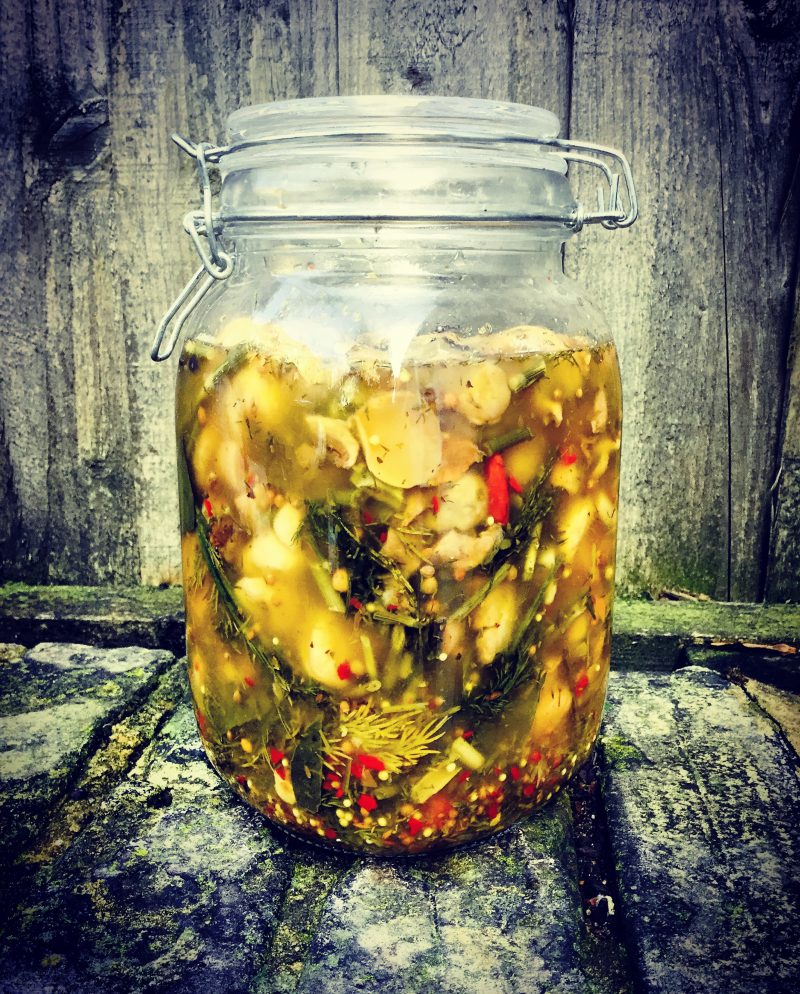 Best Fermented Mushroom Recipe A must try for any fungi lover! I have pickled and fermented quite a few batches of mushrooms and this, by far, has been my favourite and best fermented mushroom recipe! These… 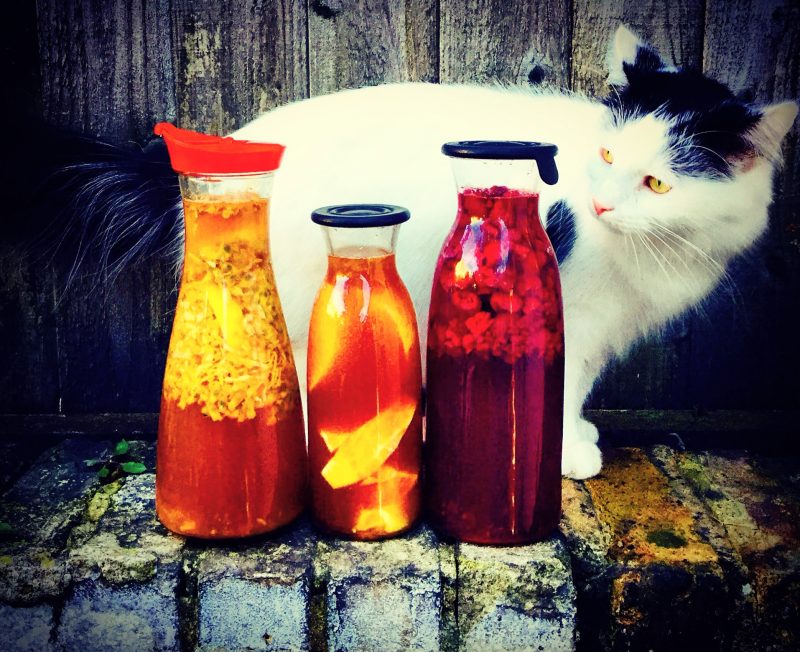 Flavouring Kombucha Tea Feel like you’ve mastered the process of making regular Kombucha and want to experiment further? Flavour your Kombucha with some creative, distinct flavours to personalise it even further! This process will begin… 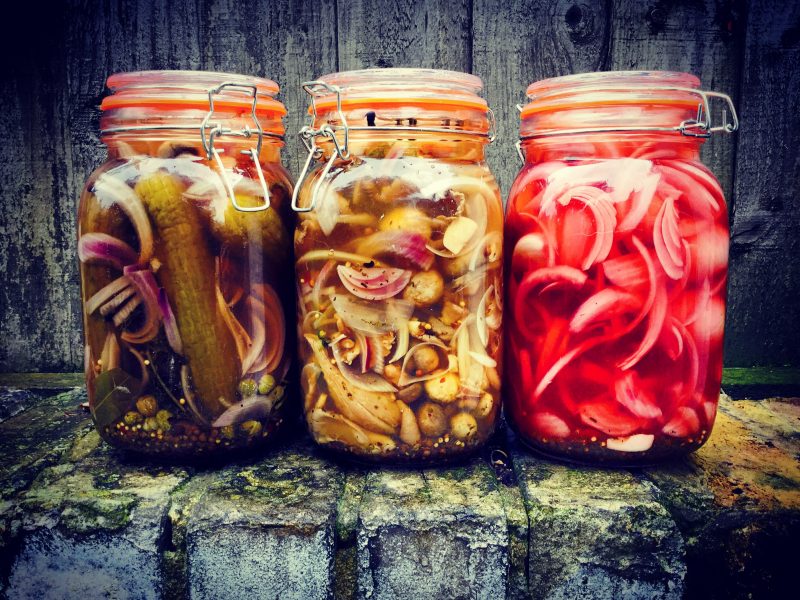 Quick Pickles – An alternative way to enjoy your favourite fruit and veg Infuse some of your favourite fresh veggies and/or fruits with a healthy dose of salt, sugar, spices, water and vinegar to produce quick,… 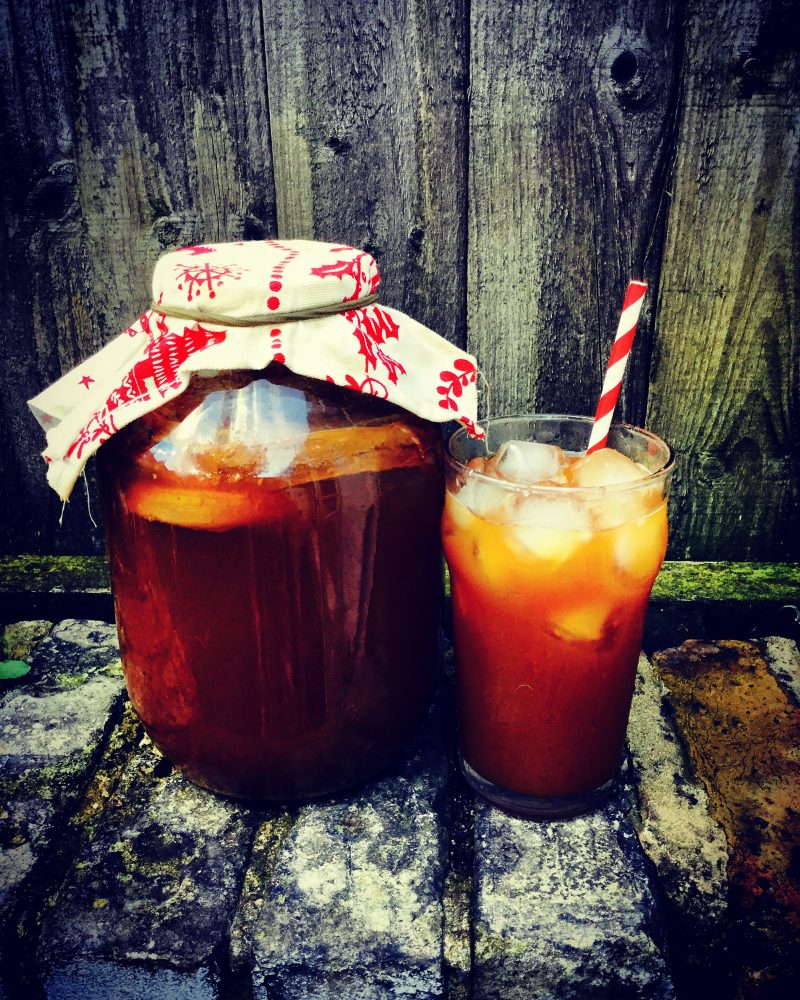